Wipro shares slipped over 5 per cent on Thursday to hit a fresh 52-week low of Rs 383.25 on the Nation Stock Exchange (NSE) intra-day trade. The Street sentiment turned negative after the IT major reported a poor September quarter show. At 11:45 AM, the counter was quoting a price of Rs 381.35 after declining more than 6 per cent.

According to the software major, Wipro closed the second quarter with a lower net profit of Rs 2,659 crore on higher revenue. It earned revenue of Rs 22,539 crore for the quarter under review up from Rs 19,667 crore earned for the period ended September 30, 2021. 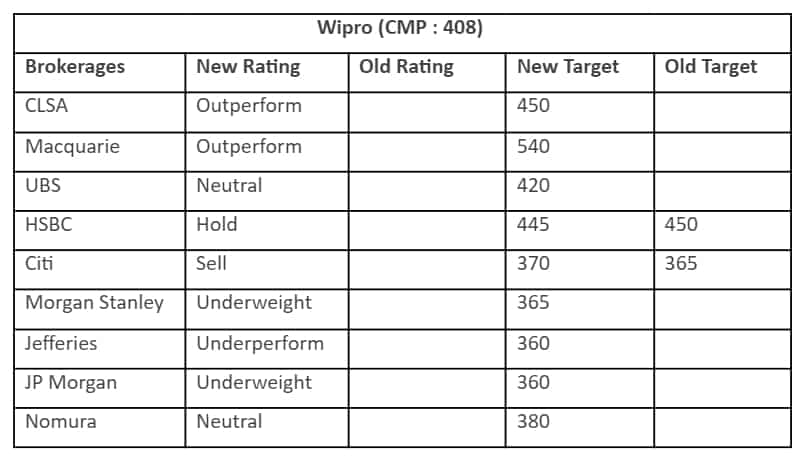 “Our ongoing investments in high-growth strategic areas have allowed us to steadily increase our win rate and enhance the quality of our pipeline. As a result of these efforts and our sharp focus on operational excellence, we are now seeing an improvement in our margins,” he said.

Wipro in its outlook for the December quarter said it expects revenue from our IT services business to be in the range of USD 2,811 million to USD 2,853 million. This translates to a sequential growth of 0.5 per cent to 2 per cent.

Operating margin for the quarter came in at 15.1 per cent, an increase of 16 bps quarter-on-quarter. Operating cash flows were 180.6 per cent of net income for the quarter at Rs 4,800 crore or USD 590 million.

The firm promoted over 10,000 employees and its attrition rates recorded a third consecutive quarter of moderation.
Jatin Dalal, Chief Financial Officer, said, “We achieved margins of 15.1 per cent in Q2 after absorbing the impact of salary increases and promotions.

“Our margin improvement was led by better price realisations and strong operational improvements in automation-led productivity. Our Operating Cash Flows was robust and at 181 per cent of our net income for the year.”

Wipro’s voluntary attrition measured in the trailing 12 months for the quarter was at 23.0 per cent — a moderation of 30 bps from the June 2022 quarter. Its attrition rate was low at 20.5 per cent during Q2 of FY22.

The company had added 15,446 employees in Q1FY23, while it onboarded more than 10,000 freshers during this period. Wipro said earnings from its clients in non-US markets fell in the second quarter.